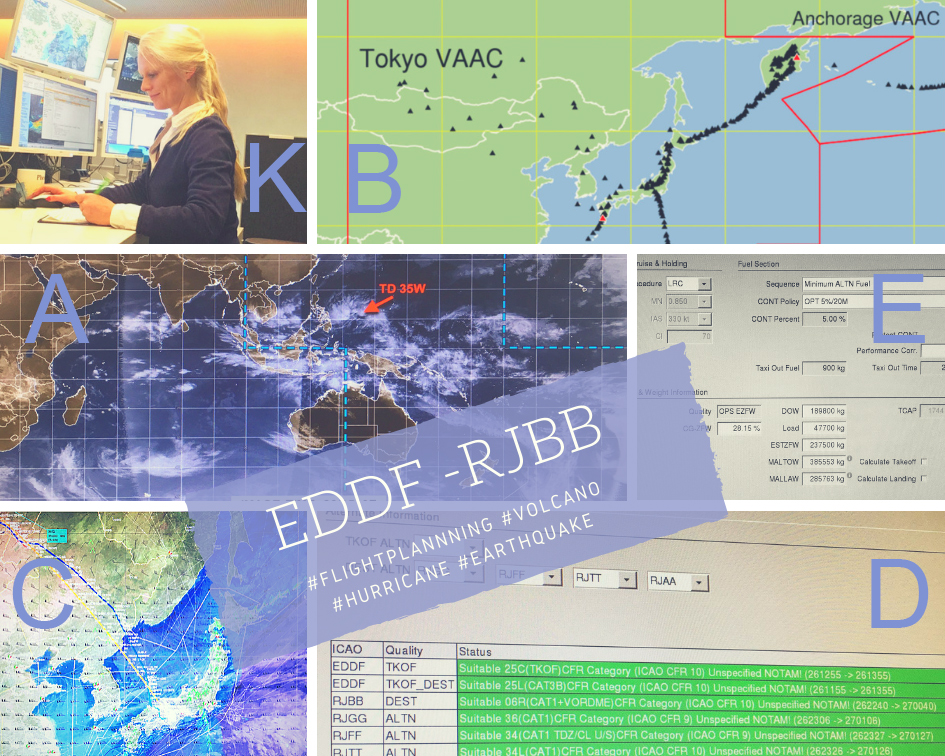 Today we have another article from Kirstin (working as a Flight Operation Officer in Frankfurt), which she fortunately shared with us, and so with you:

I recently had the honor to plan a #flight for @the.flying.camera – who was bound to #fly the #queenoftheskies to beautiful #japan 🇯🇵
As nature’s hazards regularly strike there affecting #flight ops aswell, I checked most recent advisories for typhoons (A), volcanic activity (B), earthquakes and general WX situation according satellite images (C) before even getting started.
Convinced things looked fine, I drew up my calculation scenario. this included a thorough weather/ NOTAM check determining #airport suitability, setting an alternate sequence, and RWY selection (D).
Essential parts of that calculation basis are of course the weight / load info and performance factor (or respective adjustment if required, eg in case of MEL items). The finishing touches are the cont policy to be applied, plus a performance pre-check to determine possible restrictions (E).

Now, it was route planning time (swipe to pic 2). 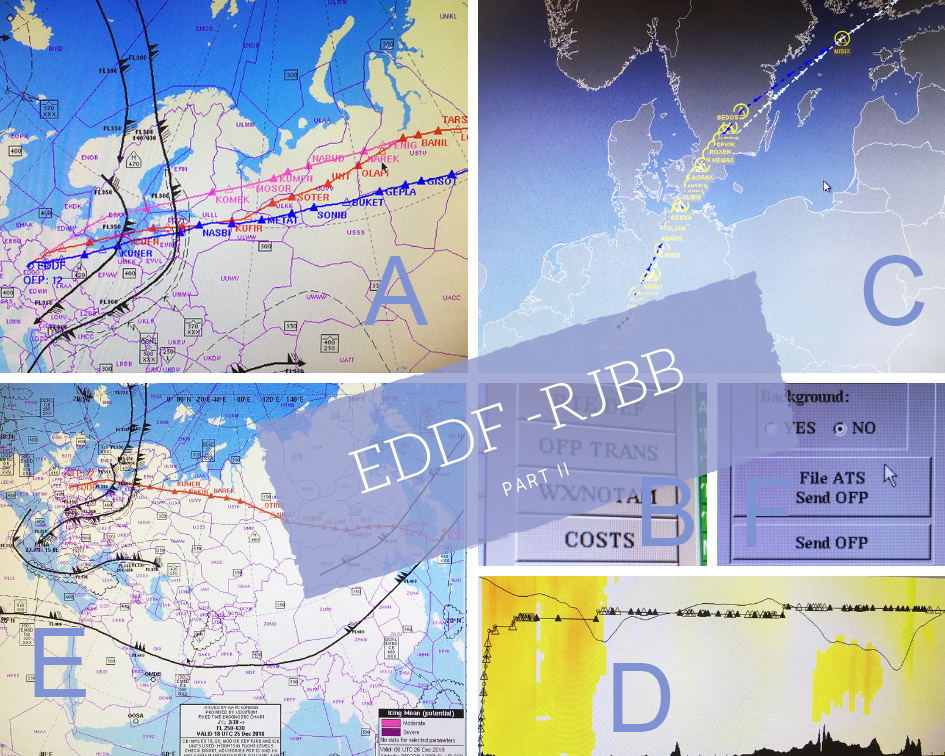 I tried out the usual optimization (Minimum Fuel / Cost / Time tracks; A), and had a look at several „pre defined routes (a set of „safe side“ routings in which traffic rights and some mandatory route portions have already been considered.
For my flight, those „PRED“‘s proved to be somewhat inefficient, resulting in long flighttime.
So I went for manual route construction, trying for the best compromise between traffic rights, time and cost considerations (B), Slot situation in Europe (C) and weather / NOTAM enroute.
I eventually chose a rte deviating slightly from optimum to cross a jet over eastern Europe at right angle to minimize CAT exposure (E).
For this rte, I then checked enroute NOTAM and prepared a rather conservative flightlevel profile (hoping to minimize flighttime right at the tropopause, which is often  bumpy – D).
For this operational #flightplan (OFP), the 22nd I‘d calculated, I wrote a few briefing remarks to the #flightcrew stating my considerations (plus, also a „NIL“ info regarding e.g. volcanoes should be passed to the #pilot in my opinion).
And then, tadahh – I hit that magic button (F), releasing the #flightplan and filing it to #atc.
Until departure, we #dispatcher‘s watch out for possible upcoming regulations, ZFW fluctuations or other factors affecting the flight.
And indeed, a couple mins later, a newly issued volcanic ash advisory popped up. however it was not a critical issue – so I wished the #crew a happy flight, and off they went ✈️