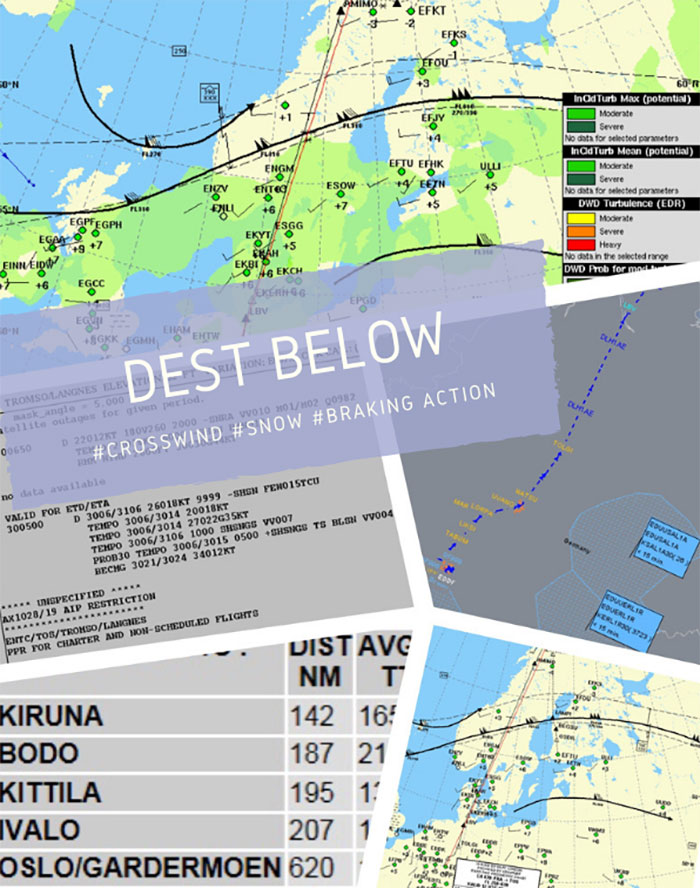 It was a Flightplanning-Saturday last week for me, and I had the great opportunity to go on a so called “route familiarisation flight”, which is necessary once a year according to our OM-A.
I had choosen a flight to Tromsø, asked the crew well in advance if they were willing to have me on board, because -as far I know- that airport needs special treatment, and I did not want to disturb.
I was welcome and started my  flightplanning 3 hours befor SKED. As usual I started checking the technical status of the aircraft, the rotation, weather and NOTAM.
Destination weather was pretty bad: strong crosswind exeeding our companies limits for landing, also snow on the runway with insufficient braking action, the sight was very low and my flight planning system does show me only one suitable alternate.
A little bit less for such a flight … and also to provide alternatives for my crew, just in case the destination weather will get worse.
Our companies “list of authorized airports” (LOAA) did not show more airports, that were available  as an ALTN for TOS/ETNC …  so I have taken out some charts.
Searching for alternates for Oslo, Turku and Helsinki, and also if they are available for my aircraft type, it came out, that Turku and Bodø might work (from the “weather point of view”) … okay: I made up a plan.
Once all was set up (reading NOTAM, weather, routing, enroute NOTAM, airspace availabilty to avoid SLOT delay ….)  I rechecked the weather again: a new forecast did came up in the meantime for the DEST and the ALTNs. I now could assume that the DEST was no longer unsuitable, and that I could choose a nearer alternate, what I did, but keeping Turku for info. I rechecked everything again, filed my flightplan and went down to the crew briefing.

“My crew” welcomed me and they checked all items from their point of view. For example: if the ACTL WX would be there at our arrival time, our DEST could never be reached: too much crosswind and no idea about the braking action so far. (The forecast is for planning, but the actual could be different. The captain has experience with that airport and was alerted: “Lets have some extra fuel … lets use Turku as our alternate and have sufficient fuel on board.” (Turku was one of “my” non standard alternates for Tromsø, which I have choosen … okay: lets see if, we did get to our destination or alternate.)

And off we went.
It was a  wonderful calm flight … blue sky, no turbulence, no traffic, no nothing. But still very bad weather at Tromsø/TOS.
We crossed that jetstream, that could be seen on the chart – the wind increased, but until now just from the side … no turbulence, just some gentle shaking for the aircraft. The weather at DEST was still pretty bad – the wind increased. Still cross, the braking action was medium-good to medium  – both items together will not allow us to land. The crew checked all alternates again and again …
Our passengers were briefed, that a landing was not very likely with this kind of wind and weather … but my cockpit crew wanted to try – according to the forecast there was still a chance.
It took us about 3 hours flying time to get there – we did not know if we could land, as in the meantime the aerodrome was closed for traffic due to heavy crosswind.
15min before we reached there, the weather improved. A Widerø plane was flying some minutes ahead and started its approach, the wind turned further south, the runway was cleaned up …
We did the same: with wind exact on the nose, “good sight” and cleaned up RWY … we could land. The ceiling, the braking action and our crosswind … finally all was suitable, and we arrived at TOS! Yeah … Just great! 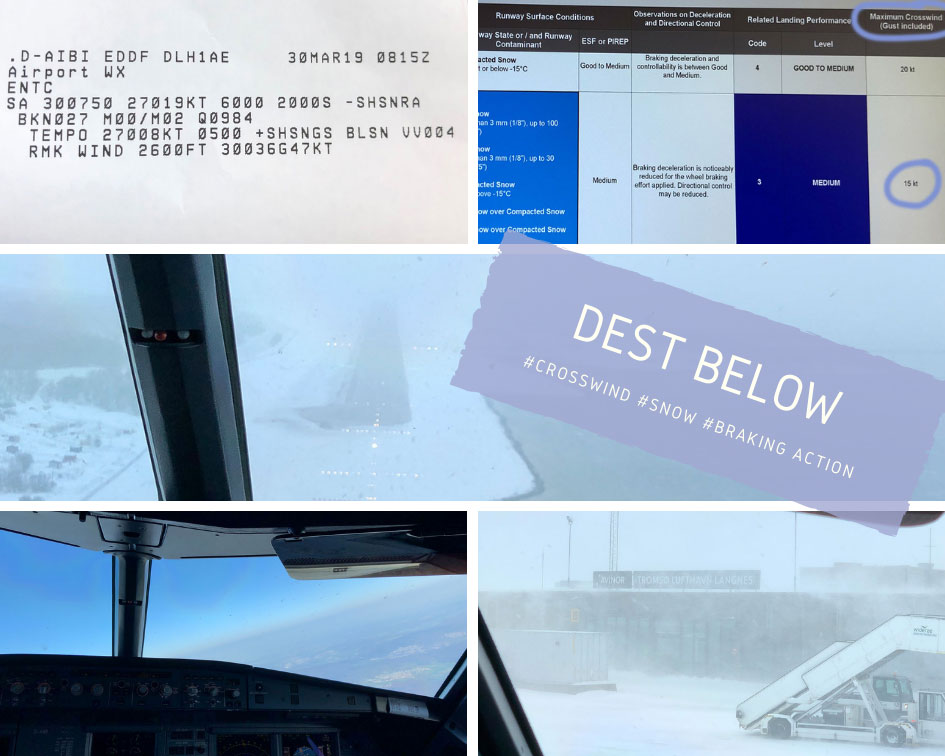 The rest has nothing to to with my flight planning at all, but was just remarkable for me:
once the cabin crew did open the doors … the wind and the snow entered the plane – exact horzontal! And it was very much snow and very much wind!
At home we had a wonderful spring day … here in Tromsø we still had winter! Stormy winter!