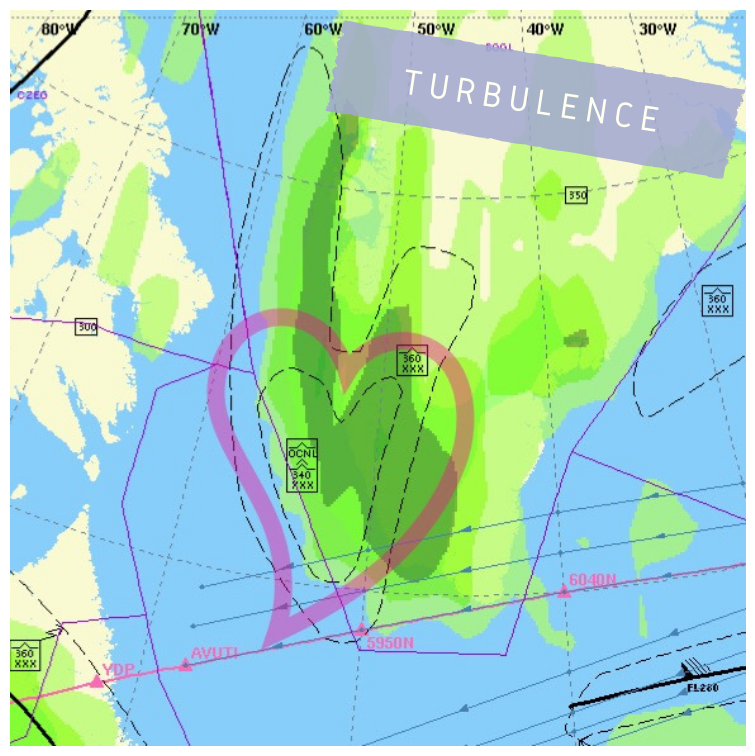 While #flightplanning a couple #transatlantic #flights , I recently was greeted by this ⬆️

It may look pretty – but that heart shape forecasts an area of severe turbulence !
So, let’s accept that creative meteorologist‘s love letter and talk about turb and how it affects #flightplan prep.
In general there’s two types of turb: associated with (especially convective) clouds, and clear air turbulence (CAT).
Very simplified, “convectivity” means air masses of different temperature and pressure are present, causing the warmer, thinner air to rise and cool, resulting in clouds forming when the water droplets in it condense, and possibly thunderstorms. Pretty clear that can cause up- / downdrafts and turb – yet rather easy to avoid d/t visible clues.

CAT’s a different matter. It also results from differences between “parcels” of air – but mostly without distinct visible phenomena. It’s frequent around jet streams, where a temperature gradient (and thus also pressure gradient – warmer air=thinner, “lighter”) is present; and tends to be most intense on the cold side.
Wind shear may also cause CAT: adjacent air masses moving at different speed or direction – and boom (which is why at jet curves or between two jets CAT often occurs).
When winds hit a mountain range, “mountain waves” can form in certain conditions, with the oscillating air causing…right, CAT (this is what’s happening e.g. around the Alps, or over Greenland: high terrain, high ranging CAT).
In our SIGWX (SIGnificant Weather) Chart, areas with forecast turbulence are displayed in thin dashed lines (the thick lines being jetstreams). Expected #flightlevels and severity are given in the lil’ rectangular boxes (the more ^, the more intense).

Overlays (in green) detail the CAT (clear air turbulence) for different levels, the greener the worse (..no political statement intended 😬).
Light turb is characterized by minor changes of #airplane attitude/ altitude or slight speed fluctuations – intensifying up to “moderate” buffeting.
As per definition, in both, #pilot control over the #aircraft can always be maintained (..rendering it mainly a comfort issue).
“Severe” turb may lead to brief periods of control loss, damage to #plane structures is possible.
Last, “extreme” turb can result in complete loss of control and severe damage – so #dispatch through those areas is prohibited at my company.

But how to handle (prolongued) moderate or severe turb?
No “fixed” guidance or rule exists, and it’s down to a case by case decision (especially for eastbound #NAT #flightdispatch: as you now know, turb is likely in the vicinity of jetstreams – but these also mean you get a good tailwind and often the most economic route).
We #dispatch folks try to avoid “severe” by preferably lateral or vertical clearance if possible. This does have limits however – if the area is too large to clear, or is directly around departure/destination. Then, we go into details to minimize impact – crossing affected areas at right angles, planning on the warm side, looking for likely less affected levels.
Same holds true for “moderate”: officially not a safety concern, we have to carefully trade off (additional) flighttime and costs vs. crew and passenger comfort (keeping in mind continued buffeting also increases #flightcrew workload, ending up in safety considerations yet again).
So, while I’ll gladly invest 10 or 20 mins to clear “severe”, I’d have a hard time justifying the same to avoid some 30 mins of “moderate”, especially when that would cause a delay.

In this case, I opted for a route south of optimum – and Greenland (pink): heavy loaded plane (so no overflying), plus once developed, mountain waves last for quite a time – not a good combo.

Fair deal to me: 5mins for safety to clear “severe” plus 2 for comfort, clearing “moderate” too.

So far, no complaints received 🤷🏼‍♀️